We Still Practice our Ojibwe Culture

Ceremonial dancing is one aspect of Ojibwe culture and tradition.

We still have totems or clans, what we call odoodeman. Clan membership passes through the male lineage, from the father’s clan. It’s still considered taboo to marry someone from the same clan.

Traditionally we lived by cultivating corn and squash, by hunting and fishing, and by harvesting wild rice. Each September we celebrate with a Wild Rice Festival. We still gather syrup from the sugar maple trees on the reservation.

We are known for our sacred birch bark scrolls, and our Midewiwin Society is the keeper of detailed scrolls of oral history, songs, events, geometry and mathematics. We are known for our birch bark canoes. We often fished using nets, but at night we would fish from our canoes. We would attract fish with a torch made of tightly twisted birch bark. When fish came near the light, we would catch them with a fishing spear.

This is how we came to be known as Lac du Flambeau. Upon seeing us in our canoes at night, the French trappers would refer to us as lac du flambeau – lake of the torches.

We call ourselves Waaswaaganing, which means Lake of Flames in Ojibwe.

During summer months, we enjoy dancing and singing at niimi’idimaa, or social pow wows. We still use the sacred sweat lodge for purification. The lodge is a circle built upon Mother Earth, and is made of willow branches, and canvas or blankets. The lodge includes a sacred fire for heating the rocks, and an altar for the sacred pipe and medicines. In addition to water, medicines include tobacco, sage, cedar and sweet grass. The sweat is a supreme communication with the Creator. 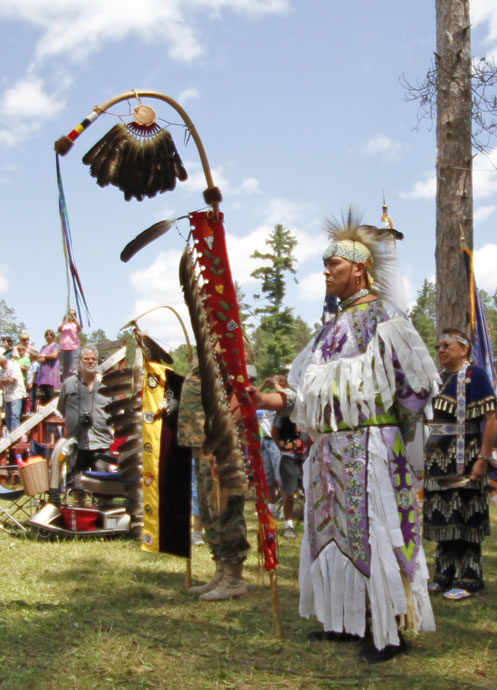 We Cherish Our Children

Before our babies can walk, we hold them upright while someone makes a drumming sound on something hard like wood. With the encouragement of the rest of the family, the child begins moving his or her legs to the drumming. Soon the baby is “dancing,” and everyone including the baby is laughing and celebrating. This wonderful feeling stays with us forever.

During the first year the infant spent most of its time in a cradle board. The wooden board was about 24 inches long, with a curved piece at the end to confine the baby’s feet. A light rod was fastened loosely at one side of the cradle board. To secure the child, two cloth binding bands were attached to the rod, placed across the child, and then pinned or tied on the other side of the board. These bands were decorated with colorful beads and braided cloth.

A rectangular hoop above the top of the cradle board framed the baby’s head. The frame supported a blanket in the winter and a thin cloth in the summer, which protected the baby from the rain and snow. A leather strap was fastened at the top of the cradle board. This enabled the mother to place the strap across her head and walk around with the baby secured against her back. Another part of an infant’s care involved pinning it tightly in cloth. During hot weather the baby was sometimes carried like this because it was cooler than the cradle board. The wrapped up baby was snug and comfortable in a blanket across the mother’s back.

One of the traditional games that we still play is Snow Snake. The game is played by teams who throw a wooden pole, or snow snake, along a trough of snow. The trough of snow is about five inches deep, rising to a slope at the end. The wooden poles have different lengths and names. The smallest poles are “snow darts,” only about six inches long. The longer poles, up to three feet, are called “short snakes.” The longest poles, up to 10-feet long, are simply called snow snakes. Sometimes snow jumps and barriers are added to make the throws more difficult. 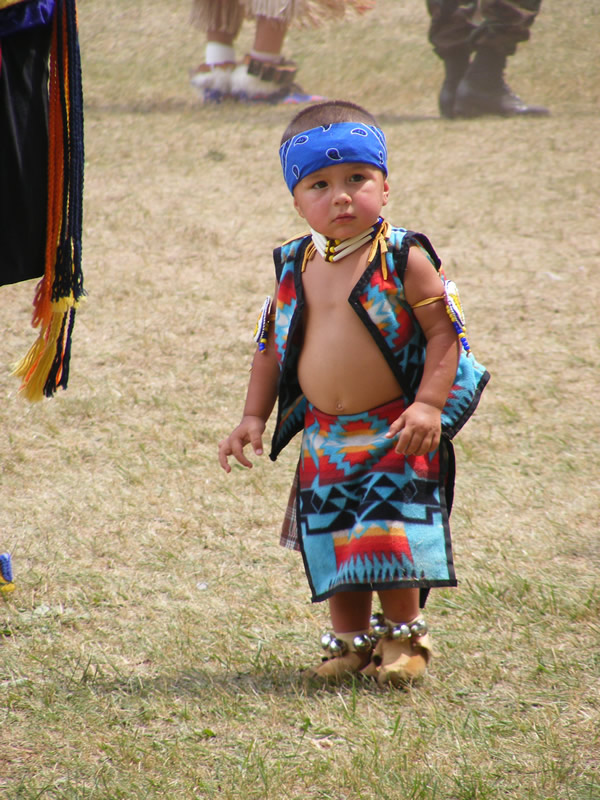 An Ojibwe toddler joins in the celebration at the Indian Bowl in 2014. (courtesy Dean Hall/Lakeland Times)

In the late 1840s, government agents in Washington began efforts to remove the Lake Superior Chippewa people from their homeland. Officials changed the location of the treaty payments to a place in Minnesota, which would require a journey of 150 miles by canoe and on foot. The result was the death of hundreds of people because of delayed payments, tainted food, disease and the onset of winter.

This became known as the Sandy Lake Tragedy.

Kechewaishke (Chief Buffalo), principal chief of the Lake Superior Chippewa, was determined to do whatever was necessary to protect his people. On April 5, 1852, he started an incredible journey to Washington, along with sub-chief Oshaga, four other Ojibwe, and interpreter Benjamin Armstrong. In addition to their provisions, Kechewaishke brought a petition to give to President Millard Fillmore. The petition was a pictograph on birch bark that included five Ojibwe totems, or clans. These totems – a crane, marten, bear, man and catfish – represented the Ojibwe Tribes of Northern Wisconsin and Upper Peninsula area. Lines from the heart and eye of each animal to the heart and eye of the crane denote that they are all of one mind.

After meeting with President Fillmore, the President announced that the removal order would be canceled, and that another treaty would establish permanent reservations for the Ojibwe in Wisconsin.

Today, there are two marble busts of Buffalo in the U.S. Capitol – a marble bust for the Senate side and a bronze bust for the House side of the Capitol. A U.S. Senate document says, “This formidable Native American was also called Great Buffalo, and the adjective was clearly deserved.”

Traditional Ojibwe dwellings included the bark house, the teepee, the peaked lodge, and the wigwam. We called all of these dwellings wigiwam. Over the years, “wigwam” became the word used to describe our most typical home, the dome-shaped, birch bark covered dwelling.

The wigwam consisted of a framework of thin wooden poles secured in the ground in a circle, and bent over to meet at the center. The ends were twisted together. Mats were woven from bulrush, a tall, grass-like plant. The mats were secured to the sides of the framework.

Sheets of birch bark were secured across the top, with a small opening left for smoke to escape. The frame poles were usually made from saplings of the ironwood tree, no more than one inch in diameter. The various components of the wigwam were tied together with strips of green basswood bark or basswood twine.

When families moved, the framework was left in place, but the coverings were carried to the new site and used for a new dwelling. 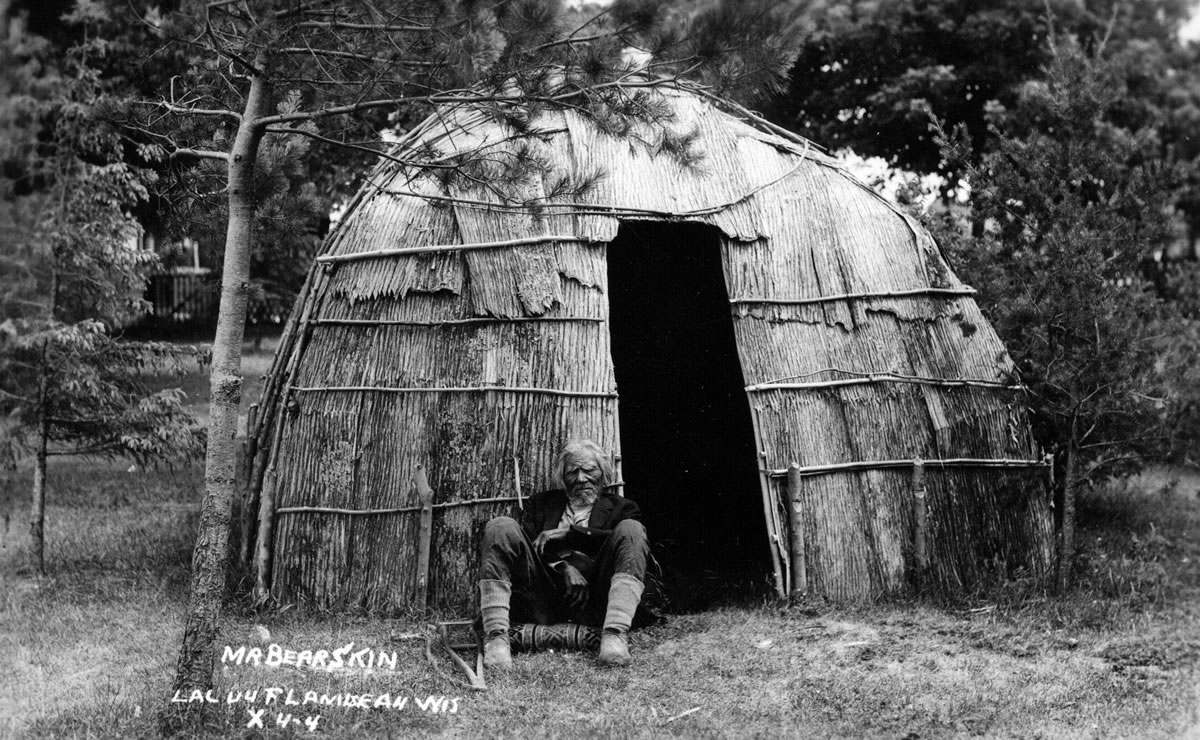 Lac du Flambeau medicine man Mr. Bearskin in front of an Ojibwe wigwam, early1900’s. The top of the dome-shaped dwellings were covered with birch bark. A row of bulrush mats were tied around the sides, sometimes two rows for greater warmth. (Courtesy Wisconsin HistoricalSociety, #78915)

For thousands of years, dugout and birch bark canoes were an important means of transportation for us. We call the dugout canoe mitigo-jiiman, which means “wood canoe.” Two men would use small fires and stone or metal tools to make a dugout canoe. This would take around 10 days.

In our more recent history, we traveled in birch bark canoes. We would cut the heavy bark from a large birch. This was done in early spring when the bark was most easily removed from the tree. Cedar was used for the frame around the top, the ribs, and the thwarts (the horizontal bars that connect the frame). The bark was stitched together using split roots of the tamarack tree, or sometimes spruce. To make the canoe watertight, gum resin was collected from evergreen trees and boiled in a kettle to make pitch. Charcoal powder was added to make the pitch firm. The pitch was applied to the seams of bark with a wooden spatula. The typical canoe was about 12 feet long and three feet across the middle. But the size varied according to use – smaller canoes were designed for speed, and larger canoes were designed for carrying belongings and trade goods. The largest canoes carried 10 people.

In May of 1980, divers were exploring the bottom of Flambeau Lake. Suddenly they saw a dugout canoe sticking out of the mud and silt. The canoe was found near the site of the last major battle between the Chippewa and the Dakota, which occurred on Strawberry Island in 1745.

This rare, 24 foot dugout canoe is on display at the George W. Brown, Jr. Ojibwe Museum in Lac du Flambeau. 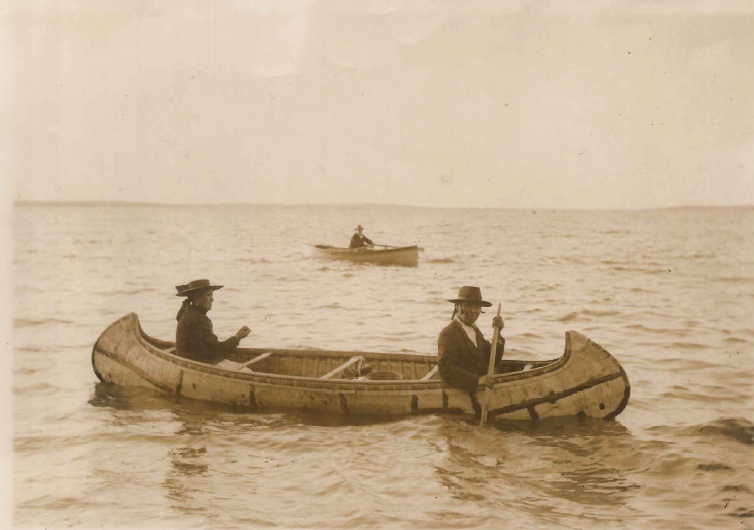