Closed for the Season

In order to keep our community and you safe, we are, unfortunately, closed for this season.

We hope you are staying safe and healthy and we look forward to seeing you in 2021!

Preserving Ojibwe Culture for Our Children and the Community

The Indian Bowl has been a centerpiece of cultural sharing and education for Lac du Flambeau and surrounding Northwoods communities since 1951.

Traditional dance and storytelling performances have brought audiences together for more than 60 years. Each summer, the Indian Bowl was the epicenter of gatherings and celebrations for Indian and non-Indian families alike. Tourists to the Northwoods journeyed annually to Lac du Flambeau (Waaswaaganing) to enjoy the best of Ojibwe culture and tradition. Guests were treated to an authentic Native American experience, and took home lasting memories and a piece of living history.

In 1965, one of the visitors was President Dwight Eisenhower! In a naming ceremony, the Tribe honored President Eisenhower with the Ojibwe name Giniw-Wi-Giizhig, or Golden Eagle.

The venue has offered artisans and historians a place to showcase the best in Native American artistry and traditional cuisine. The economic impact to the community and the region became vital, and many families relied upon the summer income to supplement their subsistence living.

In 2004, the Lac du Flambeau community recognized the disrepair the historic facility was facing. Tribal and community leaders came together to create a vision for a new Waaswaaganing Indian Bowl Living Arts and Culture Center. That vision has become a reality, and Phase 1 of the new facility is now open.

Suffering the effects of hot, humid summers and snowy winters, the decaying Indian Bowl was demolished in September 2014 to make way for the new facility, and a groundbreaking ceremony was held on August 4, 2016.

Construction was completed in July 2017, and the community hosted the July 4th Pow Wow at the new facility.

Phase 2 of the project will combine the new Indian Bowl with the George W. Brown, Jr. Ojibwe Museum and the Woodland Indian Arts Center.

The Waswagoning Ojibwe Indian Village has moved to the grounds of the Indian Bowl.

The new Waaswaaganing Indian Bowl Living Arts and Culture Center honors heritage and tradition, and provide a first-class venue for contemporary expression of living Native culture through the arts.

The Center will be the premiere Northwoods showcase for Native American performing, literary, media and visual arts, and will honor the past, celebrate the present, and prepare young cultural leaders for the future.

The Center will be a place for artists to meet, exchange and expand their creative visions, and will serve as a mecca for celebrations and for the education of future generations. 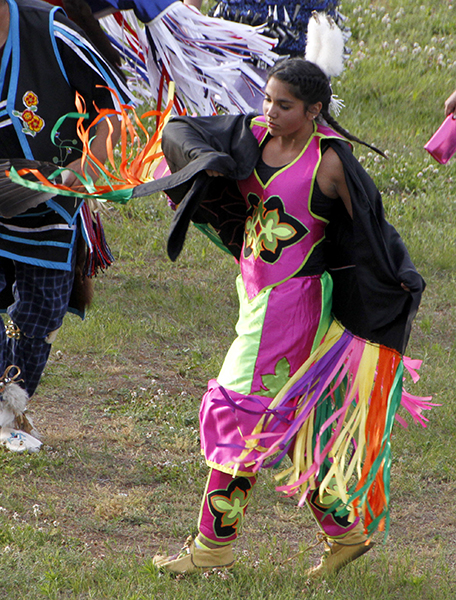 Donations are tax deductible, and will be used solely for the support of the Indian Bowl project. Donations may also be sent to Waaswaaganing Indian Bowl, P.O. Box 1061, Lac du Flambeau, WI 54538.  You may also securely donate online through PayPal.

The Waaswaaganing Indian Bowl is a vital part of the practice and preservation of the traditions and culture of the Lac du Flambeau Tribe.

The Center provides a better venue for learning the history and culture of the Ojibwe, and is a regional draw for tourism in the Northwoods.

The new Indian Bowl gives children, local families and tourists from all over the world the opportunity to learn about Native American culture and traditions.

Visitors have a chance to watch craft demonstrations and to participate in workshops such as birch bark basketry and dance regalia making. In the Cultural Center retail shop, visitors will be able to purchase authentic Ojibwe arts and crafts, and books on Ojibwe history and culture.

The new Waaswaaganing Indian Bowl Living Arts & Culture continues to be the premier cultural tourism attraction of the Northwoods.

A historic photo of dancers at the Indian Bowl in the 1950s. (Courtesy George W. Brown, Jr. Museum)

The safety of our community and you are the most important, and we hope you are staying safe and healthy.